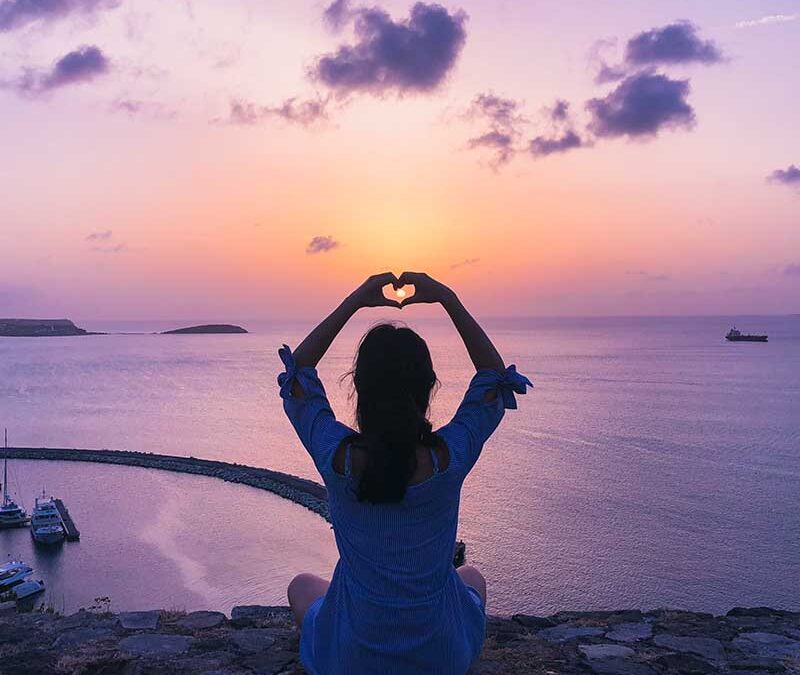 Heart-led over hard sell is a topic very close to my heart. Because when I started out in business I took a lot of advice about the right way to do things, even though it didn’t feel good to me – but these guys were the experts and making big bucks so obviously this was how I had to do it. And I think although it was perhaps a right of passage – you sometimes have to try things to know how you feel about them, it also kept me stalled in the starting blocks for a long time.

Because the truth is, there’s no one way to run your business, and being successful at marketing yourself online can look like many different things. And what’s most important is not that you’re using the latest cool technique or strategy, but that how you show up and serve your audience and let them know about the offers you have for them, feels good.

Selling. The word that instills fear into the very souls of so many heart-led entrepreneurs. Selling is sleazy. Selling is awkward. Selling is embarrassing. Selling just feels all icky and wrong…

Which is why so many online business owners (myself included) spend the first few years hardly selling a thing, or alternatively find themselves forced into sales techniques that just don’t feel good. I’ve done both of these things in the past.

Here’s the thing: yes, you’ve got to eat; yes, you deserve to earn for your service; but you don’t have to be a hard-selling marketing machine to sell your products and convert your fans into paying customers with ease. In this episode we’re talking about the brand new paradigm of selling online. One that’s less about the hard-sell, hustle and strategy, and more about being heart-led, authentic and only doing what feels good. Welcome to Episode 23 of The Content Download: Heart-led over Hard Sell: The only strategy you need to make sales online as a soulpreneur…

I made a lot of mistakes when I started my business as I’ve often talked about on this show. But the biggest was that I served but hardly ever offered anything to sell.

Ironically I was teaching copywriting skills only at the time AKA how to sell with words, but I spent most of my time coming up with excuses about why I had to wait before I could actually sell something. And it was basically I hated selling. Now I obviously wanted to make my business work and make money, but I associated selling with doing things that didn’t feel good or comfortable. Because that’s what I was seeing modelled around me.

And I think a lot of heart-led entrepreneurs feel the same, because often the sales tactics that are seen as normal, or commonly taught, are ones which can feel really uncomfortable and off-putting, both as a business owner and also a consumer.

For years, the online space has been filled with sales techniques which are so in your face, and use scare tactics and FOMO and fake urgency; and if you’re a sensitive entrepreneurial type it can make you want to recoil – personally even when I’ve wanted something, anything marketing tactics along those lines make me not want it out of principle.

Likewise, I don’t want people to work with me or buy my stuff because they felt pressured to do it ‘now or never’, or because I’d used a strategy there was a chance they might later feel had bamboozled them into taking action. There had to be another way, and there is, and yet because few people I could see where modelling it when I first started out in online business, I didn’t realise that I was already pretty much doing it, just not taking that final vital step of asking for the sale (because that bit, I don’t think you can get around).

Now these old hard-sell techniques are still going on today, you don’t have to look far for more of that hustling, pushing, paradigm.  Big launches with flashy videos that are all high production values, fluff and FOMO; some even using NLP techniques for evil to foolproof a sale. And there’s no doubt that makes a lot of money for a lot of people. But when you’re a heart-led entrepreneur that is never going to feel good as a marketing tactic.

And even though I KNOW that good copywriting and marketing skills, persuade but never manipulate, and often that persuasion is exactly what we need to get over our procrastination and self sabotage and ‘one day’ mentality, and take the action we want to take…. I have also seen a lot of shady lines being drawn around this, which could tip over into persuading someone to do something they want to do, but aren’t quite ready to do yet…

But as I say, that paradigm, I think is on the way out. And there is an approach that feels good and authentic and easy, and thankfully is something that’s now being modelled by some really conscious entrepreneurs right from the big well-oiled machines of the 7 figure personality led brands, with high production values and fancy funnels, to the super successful but more low key online experts I see in my own online community of hear-led entrepreneurs.

And the thing they all have in common is what I call content with a heartbeat. Essentially, it’s showing up, connecting with, and serving your audience; being a real person – with values and experiences and a world view; it’s showing them behind the scenes, letting them in. Giving more than you’re asking for, and filling your audience with good will and love for what you do.

What this is not about is giving away your every secret or having a social media feed that’s essentially a how-to on your topic of interest. It’s about showing up as 4 dimensional person online – heart and soul – in every way that people want to connect with you online – as an authority and expert, but also as a real person with experiences and stories and a life that is happening behind the curtain.

Why is this important? Well, because people don’t buy products they buy into the brands and what they stand for – and as a heart-centred entrepreneur everything you are and stand for is what your brand is about.

So when you show up and consistently share this – the hard sell isn’t needed. You just tell them what you have to offer, and many of them will already have all the information they need to know whether they’re a no or a yes.

Now, that doesn’t mean that marketing and copywriting techniques shouldn’t be used. It’s just the intention behind them is different.

Like deadlines: not because you’re forcing them to buy something out of FOMO, but because we all live very full lives, online and offline, and you understand we all need deadlines to help focus our attention and actually take action;

Like real urgency –  in other words shining a light on what their problem actually feels like. Not because you want to prod their pain, but because you want them to understand that you understand what their problem actually means for them, and help them realise the benefits of solving this problem today rather than tomorrow – And you know that for some it will be today, and for others, they won’t be quite ready, and that’s fine they’re either not your people or not your people yet and you’re fine with that.

This also doesn’t mean you can mention your offer once and because you’ve built up such incredible know, like, trust  they’ll all buy straight away. Because the latest research is people need to hear about something around 20 times before they actually register it’s happening. For a long time we’ve been building a marketing filter to protect ourselves from the thousands of marketing messages we receive day in and day out, which means if you’re selling something you have to work harder to get heard.

That doesn’t mean using NLP for evil or sleazy marketing tactics, but it does mean that when you do have something to sell we DO need to talk about it and how bloody awesome it is, all the time, and unapologetically.  But it won’t feel awkward because you know you’ve been showing up as a genuine person, giving more than you receive, and that your paid offer is just the next level of service.

And it doesn’t mean you can’t ever slip into someone’s DMs. Because you know there’s a difference between cold messaging someone you’ve never spoken to or have connected with for the sole purpose of making a sale; and using DMs as a high touch, and heart-led approach to people you know you resonate with, and you know need what you want, and would appreciate and be flattered by you approaching them directly.

What I hope this shows you, is that the hard-sell is the old paradigm, and the heart-led sell is the new paradigm; and for me the difference is creating content with a heartbeat that serves, and let’s them know who you are; and then lets them know what you have to offer.

The difference here is all about the energy – not grabby. pushy, needy energy, but an energy that gives more than it receives; an energy that  is obsessed with serving, but in an unattached way, because you know that a yes that really means no now, is nowhere near as satisfying as a yes that’s all in, just a few months later.

Content with a heartbeat is exactly what I teach inside my membership community Fearless Content by the way, which is about to open its doors to enrollment for a short time very soon (because remember, deadlines focus attention). If you want to be the first to know, you can hop onto the waitlist now: https://catebutlerross.lpages.co/fearless-content-waitlist/

If you’ve got some value from this, I’d love you to come over and join the conversation in The Content Download’s Free group https://www.facebook.com/groups/thecontentdownload.