Why women’s circles are becoming a thing (it’s not a revolution, it’s a remembrance) 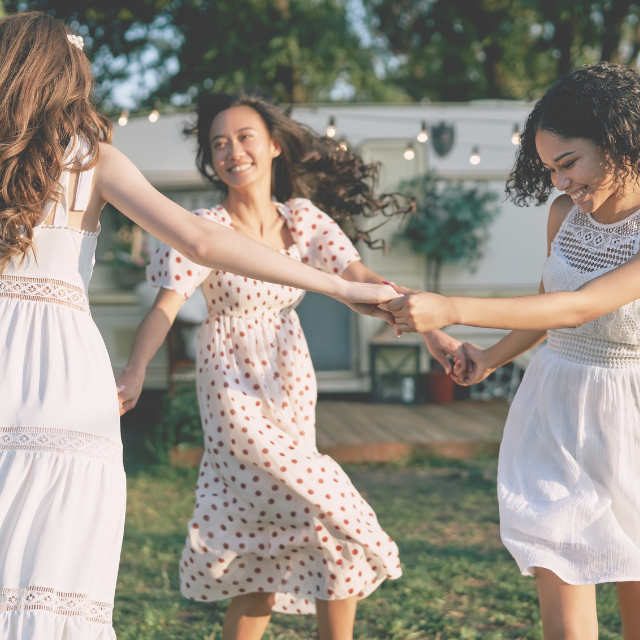 When I joined my first ‘sister circle’ last year, I’d never done anything like it before and yet it felt like a homecoming – that’s because women have been doing this for thousands of years – it’s just the last few hundred that there’s been a blip.

That’s what my sister said to me a few nights ago as we drove home from a new moon intention setting ceremony, and I was pleased and relieved because part of me was ready for:

But of course she didn’t, because when she got there, she remembered, just like I did.

Since last summer I’ve been meeting up with a group of about 16 women, once or twice a month. Basically we meditate, set intentions for ourselves and for the earth; we burn sage, share stories, laugh a lot. Cry a little. Don’t take ourselves too seriously. Drink tea. Eat cake. Hold hands and sing.

Each time I’d come home and tell my mum and sister about the hope and peace these meetings and these incredible women gave me, and so wanting some of that too perhaps, last Wednesday, there they were driving along through the pitch black country lanes with me on their way to their first meeting too.

It was on this drive that I suddenly reverted from aged 40 to 14, dying of awkwardness at the prospect of these two worlds colliding; it’s funny how difficult it can be to introduce one important thing in our lives to another; and this thing was not familiar territory for mum and my sister, who unlike me had probably never even thought about singing under the stars and burning their worries into ash on a bonfire – I have always been the slightly alternative one of a fairly alternative family.

It was only last year though that I discovered there was a new group starting up locally to me, looking to work together to practise spiritual alchemy and meditate. I didn’t know about the singing and the hand holding at that point and possibly may have been less keen if I did, but anyway, I just knew straight away that this was for me.

Since I was little, I’ve always been drawn to the idea of women being stronger together. But the girl power of the 90s when I was a teenager was just contrived  while the same media and consumer brands simultaneously promoted  body shaming, double standards, moral judgement, perfection, harmful gossip and the constant pitching of women against women.

Even the magazines I worked for that claimed to champion women, seemed to paradoxically keep them trapped in a box.

It was all the exact opposite to everything I yearned for.

I wanted the divine feminine, ancient wisdom; the unity and support that comes from standing side by side, holding space; sharing; working with the natural cycles of life and of the earth.

I so wanted to be in like-minded sisterhood, but most other women in my life were so detached from these ideas that they just thought I was a bit odd and a bit much, hopefully in an endearing way, but definitely odd.

I’d often think of the women I’d want in my circle or my red tent; the ones who’d have my back: a tribe of strong women with open hearts and curious minds, who didn’t want to moan or judge or just make mundane small talk; but a group of women who were natural givers, nurturers, wise and intuitive, who took responsibility for their lives and their growth; who were open minded to miracles and the mystical; who wanted to live a life of service and magic and love.

The funny thing is, I never thought I’d actually have that. But of course, we never truly desire the things that aren’t meant for us, and it turns out I wasn’t the only one looking for that in my life.

And so over the last year our tribe found each other: a writer, a couple of homeopaths, a computer engineer, a waitress, a former university lecturer, many mothers, grandmothers, hands on healers, therapists –  we’ve even got a dentist. And of course, now my sister and my mum too, a photographer and an ex-nurse, who arrived last week open-minded but apprehensive, and returned home hopeful and hearts full.

An E. M Forster quote is going around the internet right now. It goes:

“I’m sure if the mothers of various nations could meet, there would be no more wars.”

Well, I’m sure if every woman in every community had a circle, there’d be so much more love.

I think everyone needs that actually. Not just us ladies, although it’s the women who are leading the way; awakening and healing the world by healing ourselves.

It’s a revolution, or as Kathy who leads my group says, a remembrance; because Women have been doing this for thousands of years, these last couple of hundred have just been a blip.

If you want this again too, now is the time to call in your soul tribe – old school styley –  because I guarantee there are others somewhere in your sphere, who want to do it too. You’ve just got to decide to find each other.

If you’re interested in the idea of finding a women’s circle near to you I’d recommend following https://mitlesouthey.com/ and https://www.sisterstories.co/; or keep an ear to the ground in your local holistic, healing and spiritual communities as these groups often are running via word of mouth.

If you’d like to receive my blogs on creativity, writing, spirituality and self development direct to your inbox, make sure your subscribe to my Luminous Letters below.